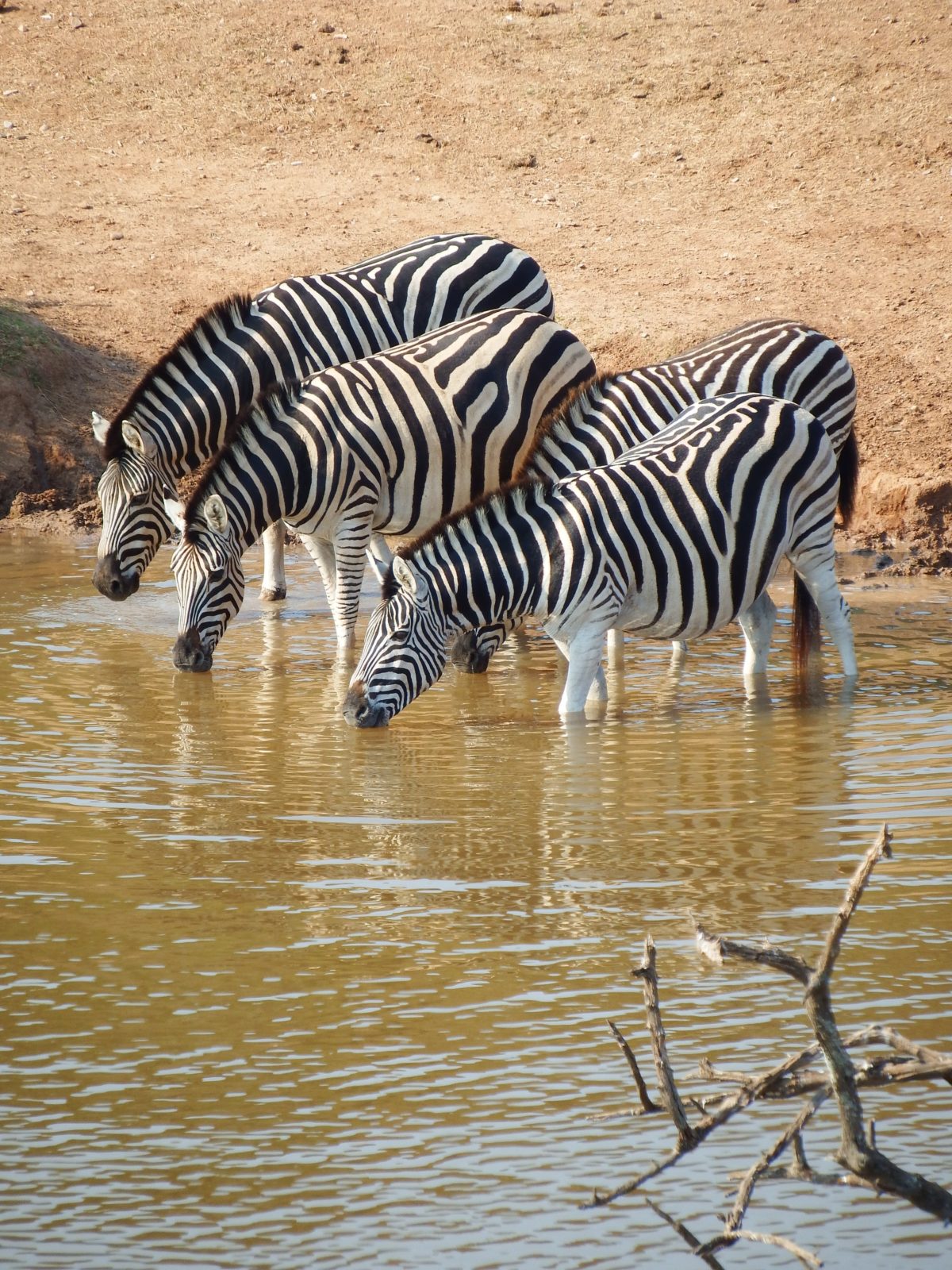 “Ntatemogolo wait for me.” Boipuso, the youngest of the Burchell’s Zebra, says running after his grandfather. The Chief is leading the herd toward the Makgadikgadi Pans for their annual migration. It is early morning and the sky is majestic. The older Zebra looks back fondly at his only grandchild and pauses briefly, waiting for him to catch up. The foal runs excitedly towards Ntatemogolo and without waiting to catch his breath said, “Finish the story Ntatemogolo, please… please! “ The sun rose with purpose, beating down on the cracked barren land.  The herd walks on, facing the gruelling journey to the pans. The brilliant rays bake the horizon and coax the desert out of the earth. The heat has always been a hellish one. The rains promising fertility were meant to come soon but this expectation creates angst amongst the herd. Peace reigns among them majority of the time but of late there are a lot more dissenting views. As the Chief, Ntatemogolo is never threatened by this, he knows letting everyone express their views often strengthens the herd and allows him to lead with their approval. It is habitual for Ntatemogolo to allow all to be heard before ruling on any one issue. Ntatemogolo does not lead by himself; he consults extensively with the clan leaders in the herd who also consult even more extensively with their respective clans within the herd. He recalls what the young one was speaking of; the curious calf had begun asking questions about the herd and why things were a certain way and he had begun explaining to Boipuso the history of the herd. Ntatemogolo searches his mind trying to recall where he had left off but could not quite recall.

“Tell me Boipuso, where did I leave the story child of my child?” Ntatemogolo asked him.

“Oh Ntatemogolo! Don’t you remember? The herd had just gotten away from the control of the Mighty Lions and was enjoying their freedom and independence. You said for the first time the herd was being led by one of its own.”

Ntatemogolo smiled inwardly remembering the times the herd had insisted on ruling themselves. There had been a pride of Lions that they had sought protection from because they were at risk of being attacked by vicious neighbouring predators in the South Lands. A lot of the older Zebra were against ceding their power and control over the herd to the Lions but eventually they saw it was the only to protect them. In time the herd had become stable enough to rule over themselves and they overcame a lot of strife to convince the Mighty Lions that they could stand on their own without fear of other predators. When the herd had gotten its independence, it had never felt so good to be a Zebra. Their stripes were those of freedom and the herd was invigorated by the prospect of building themselves into a herd known for peace and prosperity. Ntatemogolo had gotten lost in his thoughts and Boipuso looked up at him, impatiently waiting for his story to resume.

“We thought we were ready for our freedom and every member of the herd had craved it but without the MightyLions a lot of things happened. We had no way of educating our foals of the way of life because we had not yet established schools of our own. The area in which we had settled was dry and semi-arid with very little drinking water. Our herd, at that time, did not partake in the politics of the animal kingdom and so we were as low as we could possibly go.” Ntatemogolo lamented.

Boipuso’s eyes were wide open with shock as he said, “So what did you do, were you the chief yet?”

“No my child, I was much too young to be chief, but not too young to see what needed to be done. We needed resources to trade with other herds and get the things we needed to stand on our own. Amongst the animal kingdom we were rated one of the poorest herds in the world. It was a bad time but we were still reeling off of the high of self-governance. A lot of other herds had suffered a great deal to get their freedom from the predators that protected them so we remained grateful that we transitioned without bloodshed…”

As Ntatemogolo finished his sentence, he looked down to see that the herd had reached the edge of the dried Lake Makgadikgadi. With his hoof he scratched the sandy river bed and felt pride well up in his heart. It was always amazing to him that even with very little and with even less water, the herd had come as far as it had. It was not as if there were millions and millions of Zebra and on the grand scheme of things, they did not possess that much wealth. But somehow regardless of obstacles, the herd had put the good of the tribe above personal, selfish gain and worked toward uplifting the herd. With Boipuso walking steadily beside him, Ntatemogolo looked for a place where they would settle for the long, cold desert night. In the arduous sun, they had walked all day and the time for rest had come. Boipuso was frolicking around his mother a little too excitedly for a foal that was meant to be getting ready for bed.

“Boipuso,” Ntatemogolo called, “let your poor mother be. Come and rest beside me. I thought you would want to hear the rest of the story before you go to bed.”

Boipuso wasted no time coming to cuddle close to his grandfather. Behind him other foals settled down, eager to hear the story of their history too. The closeness of their body heat chased away the harsh chill of the desert night. This was the way of the herd, histories, customs, and traditions were passed down time and time again from the old to the young, experience opening the eyes of the ignorant. After they had all settled down, Ntatemogolo began again.

“Does anyone know what Lesedi La Rona is?”

“It’s the biggest shiny stone found where our herd lives.” One of the foals at the back answered.

Ntatemogolo smiled, “Yes, you are right young one. The shiny stones are very important to the herd, do you know why? When things got bad after getting our independence from the Mighty Lions, many members of the herd wondered how we were going to turn it all around. It was almost like a gift from the ancestors when the shiny stones were first found. After their discovery, the herd finally had something other animals had always desired. The herd took a wise approach to how they would trade the shiny stones and in the end it made us a more stable community. The shiny stones helped us find better places to graze and we were able to build our own schools to teach our young. We went from being the poorest herds to one of the fastest growing ones in trade. You’re too young to understand it completely but the shiny stones helped a great deal.”

Some of the foals had fallen asleep but Boipuso and a few others remained wide awake and eager to hear the rest of the story.

One of the foals made a sincere request, “Tell us what happened next.”

“The herd was truly thriving; we had finally found the one thing that would set us apart from the other herds. Then all of a sudden, animals started dying. First it was the eccentric ones then the males, then everyone. Death spread faster than a raging wild fire. There was a breakout of the worst case of foot and mouth disease. It came like a thief in the night, stealing lives of the innocent, young and old. Sometimes a mother did not know she had the disease and she would pass it onto her foal and they would both die. A lot of people died.” Ntatemogolo paused because it had been a testing time and reliving it in memory seemed to still haunt him. What he did not tell the foals was that it was worse than what he was making it. That strain of foot and mouth had put the herd at a standstill. Foals were either infected or left orphaned and too many lives were lost. No one had the remedies needed to stop the massacre of the pandemic and for a long time the tears of the herd were red with the blood of the dead.

“Well, eventually, somewhere far away, they found some roots and leaves to make it better. Any animal who had it did not suffer as much and the new remedy allowed them to live longer. The herd put all their heads together to try to find ways of avoiding catching the new strain of the foot and mouth disease. We still struggle with it today but we have come a long way.”

Ntatemogolo paused and then realised he had been speaking to himself. The foals lay fast asleep at his feet. They slept soundly without a care in the world. That was what Ntatemogolo loved the most about the times they were living in now. Although the herd still needed vast improvement, Ntatemogolo took solace in the fact that even with all the mistakes he may have made as Chief, he had, even in the smallest way, improved the lives of those who would come after him. It was not a sole effort either; it was because of all the clan leaders who had assisted him. Ntatemogolo slept peacefully that night in the comfort of his accomplishments as the chief of the Burchell’s Zebra.

When the sun rose the next day the herd resumed their trek across the Makgadikgadi and as he always did, Boipuso galloped through the herd until he was trotting alongside his grandfather. They travelled in silence for a while, each one enjoying the unspoken bond they shared. Eventually Boipuso’s curiosity got the better of him and the questions poured forth.

“So… why do we keep migrating? And why do we all go?” Boipuso asked with a hint of whining.

Ntatemogolo chuckled and said, “Well young one, we go seeking fertility in the lands. We go seeking prosperity. We cannot go having left one Zebra behind for that is not the way of the herd. The reason why we do anything is for the prosperity of the future of the herd. There are some elders that may eat more grass than they should but the herd usually has its own way of dealing with them.

Boipuso thought about what Ntatemogolo had just said and asked “Will we ever stop migrating? Like if we got to the perfect place?”

Boipuso’s question mad e Ntatemogolo pause in thought. He had asked himself many times if the journey of the herd would ever end. It seemed to him that although they all sought to find a utopian ideal in their society, their journey would never end. And so they walked on, Ntatemogolo leading the herd and Boipuso trotting along beside him, each a representation of different times in their herd. They walked on, experience alongside future potential and together they knew they could get their herd anywhere they wanted it to go.